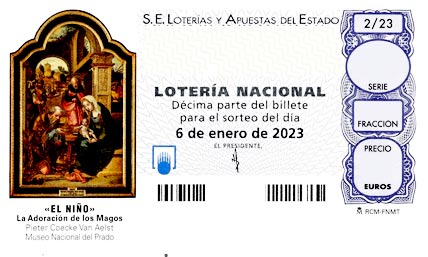 How to play «Lottery El Niño»?

The Extraordinary Raffle of El Niño, is a very popular raffle that takes place at Christmas time, a few weeks after the Christmas Raffle. It takes place on January 6 and is known as one of the lottery raffles that awards more prizes. The odds of winning a prize in El Niño are greater than in the Christmas raffle.

In order to play you need to buy one or several tenths of El Niño Lottery. The draw consists in the distribution of numbers ranging from 00,000 to 99,999 and the subsequent draw of different prizes between these numbers. Each number is divided into series, the number of series depends on the emission of each year, which in turn are subdivided into 10 tenths each, and form a ticket. In that way, the final number that the participant can acquire is composed by the number itself, the serial number and the fraction. The tickets are called tenth because the bettor plays the "tenth" part of a ticket.

A single raffle is held every January 6, coinciding with the feast of the day of Kings. It is broadcast on television and starts at 12:00.

In the Extraordinary Draws of El Niño there are 3 refunds, which makes the number of tenth winners higher. If the last number of your bet matches any of the withdrawn refunds, you will get the value of your bet.

They are smaller prizes but they distribute an interesting amount. They offer numerous prizes extractions of 2, 3 and 4 digit endings. Approximations, giving a prize to the number before and after the one that obtains the first and the second prize.